An orchid grower himself since 1980, Tom Mirenda was the Smithsonian Gardens’ orchid collection specialist for more than 15 years. Along with his duties maintaining and curating the Smithsonian’s collection of 9,000 orchids, Tom helped to develop educational displays for Smithsonian Garden exhibits visited by hundreds of thousands of museum patrons. He frequently travels around the U.S. and internationally, giving talks and presentations to scientists as well as the general public about orchid ecology, pollination biology, and strategies for orchid conservation.

Originally trained as a marine biologist, Tom could no longer resist the lure of the flower and made the switch to plants and orchids while living in Hawaii in his 20s. He has worked with orchids at the New York Botanical Garden, the Brooklyn Botanic Garden and with the extensive private collection at the Greentree Estate in Long Island. He also served as floor manager at the New York International Orchid Show for several years.

The author of numerous articles on orchids, Tom’s contributions have appeared in the magazine of the American Orchid Society, the Orchid Review (UK), Orchid Digest and the Dutch publication, Orchideeën. He is passionate about building partnerships between the overlapping circles of botanic gardens, hobby and commercial growers, and scientists to work toward the goal of protecting orchids and their habitats. In his free time, Tom sings with the Victorian Lyric Opera Company, recently as Oswald from Gilbert and Sullivan’s Haddon Hall. 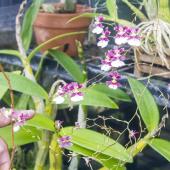