Smithsonian scientist Melanie McField is the Founder and Director of the Healthy Reefs for Healthy People program at the Smithsonian's National Museum of Natural History. From the time she was a child she knew that she wanted to be a marine biologist, and after graduating from college Melanie went to work in Belize as part of the Peace Corps. There she worked as a marine biologist in the Hol Chan Marine Reserve and learned marine conservation management from the bottom up. She has since dedicated her work to conserving the MAR and supporting local communities in Belize and the Western Caribbean. Melanie has now worked in Belize for over 20 years and at the Smithsonian since 2006.

In 2001, she received her PhD in Marine Science from the University of South Florida, with assistance of the first International Society of Reef Studies (ISRS) Fellowship supporting her research exploring the role of disturbance events and the impact of management on coral reefs in Belize. She has served on the Council of the ISRS, is currently on the Steering Committee of the Global Coral Reef Monitoring Network in the Caribbean and is involved in several national (Belize) and regional advisory committees, Boards and graduate student committees. 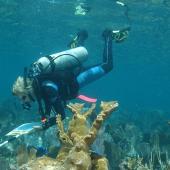