Mike Hallworth is a postdoctoral fellow at the Smithsonian Migratory Bird Center (SMBC). He studies migratory connectivity, the connection between breeding and non-breeding areas of migratory organisms and population ecology of migratory songbirds.

Mike has been interested in the natural world since childhood. He realized that he wanted to conduct ecological research after taking an intensive tropical biology field course in Puerto Rico as an undergraduate at Plymouth State University. He has studied migratory songbirds in their temperate breeding grounds in North America and their tropical non-breeding grounds in the Caribbean, and Central and South America.

Since joining SMBC, Mike has studied the breeding ecology of songbirds at Hubbard Brook Experimental Forest in New Hampshire. In addition, he studied migratory connectivity of ovenbirds (Seiurus aurocapilla) with field sites in North America and the Caribbean. Mike earned a MS from Plymouth State University in 2007, a PhD from George Mason University in 2014 and has been affiliated with the SMBC since 2008. 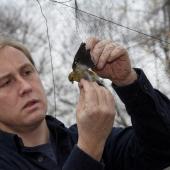 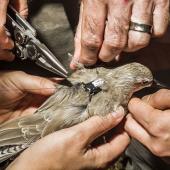