In the past 10 years, the Smithsonian Conservation Biology Institute has made groundbreaking scientific advancements toward the conservation of coral reefs, using modern reproductive technologies focused on cryopreservation of tissues, cells and germ cells. These breakthroughs have the potential to bring tremendous benefits to our oceans and society. Given this new knowledge, we now have the tools to go from laboratory to reef, worldwide! 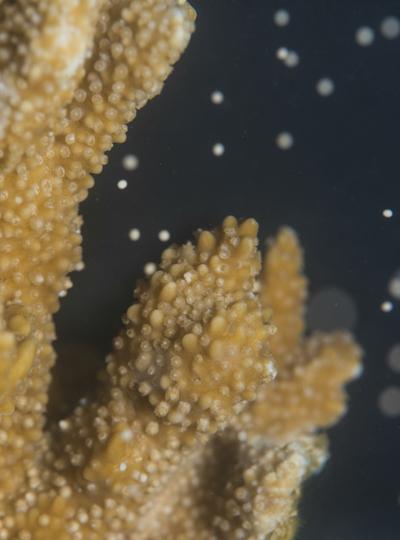 Coral reefs create the habitat and homes for over one quarter of all marine life in our oceans, yet they are under siege throughout the world, with 75% of all reefs being pushed towards extinction. Throughout the world coral reefs are being degraded at unprecedented rates. Locally, reefs are damaged by pollution, nutrients and sedimentation from outdated land-use, fishing and mining practices. Globally, increased greenhouse gases are warming and acidifying oceans, making corals more susceptible to stress, bleaching and newly emerging diseases. The coupling of climate change and anthropogenic stressors has caused a widespread and well-recognized reef crisis, and decisive conservation actions are urgently needed to save our reefs.

The status of coral reefs worldwide is dire, with approximately 75% threatened by local and global stressors, and approximately 55% of fish stocks overfished. Although well-managed marine parks are afforded some protection, our reefs remain vulnerable to disease, natural disasters and global human impacts. Because these threats do not respect geo-political boundaries, we must resolve to act globally to implement effective conservation strategies.

Healthy oceans and reef ecosystems are critical to all life on Earth. We believe that complacency about these threats is not an option, because more than 1 billion people around the globe depend on coral reefs for their livelihoods, food, medicine, and protection from storms. If current energy uses are not modified and sophisticated marine practices are not developed to conserve and protect our coral reefs, the results will be dire. Despite these ominous projections, Smithsonian scientists are creating hope for the future of our reefs. 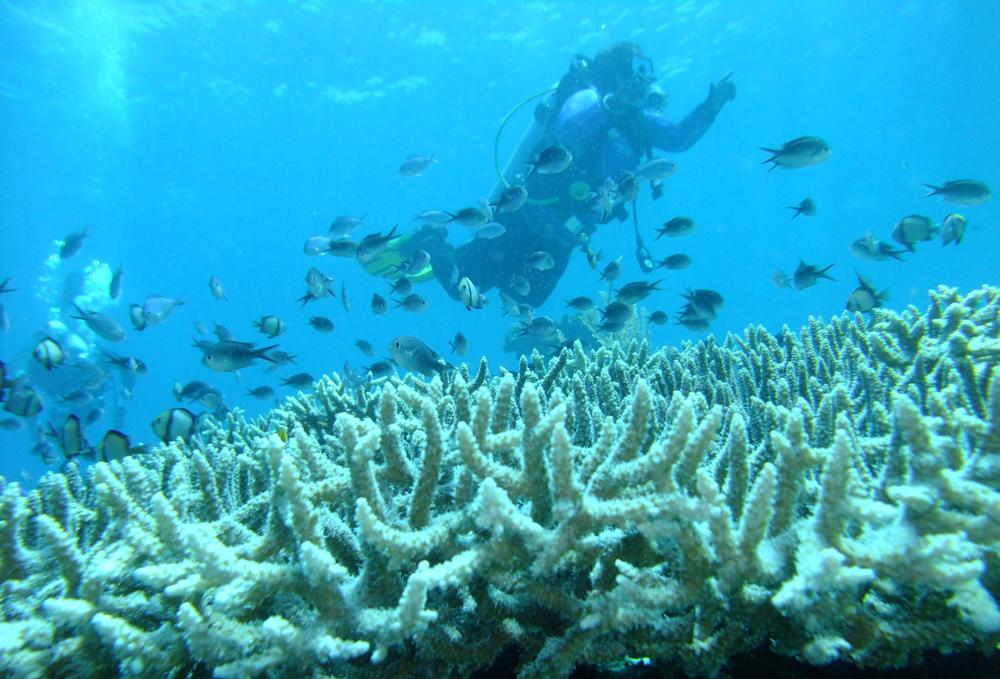 Smithsonian marine biologist, Dr. Mary Hagedorn, is leading a global network of scientists in one of the most unique ocean-conservation programs in the world today, called the Reef Recovery Initiative which focuses on cryopreservation of marine species. Although conservation practices, such as marine protected areas, may help reduce the loss of genetic diversity on reefs, they are not enough! The global effects of climate change will continue to erode reefs worldwide, causing a continued decline in population numbers and loss of biodiversity. Conservation techniques, such as genetic banks using frozen samples hold strong promise to help offset these threats. These stored cells remain frozen, but alive, in liquid nitrogen- safe for hundreds of years. There are very few cryopreserved species collections utilized specifically for conservation, much less one for oceanic species. Moreover, as the only group of scientists in the world both developing and applying this modern technology to help reefs, their work is crucial. They have made tremendous advances in the past two years, including the creation of: 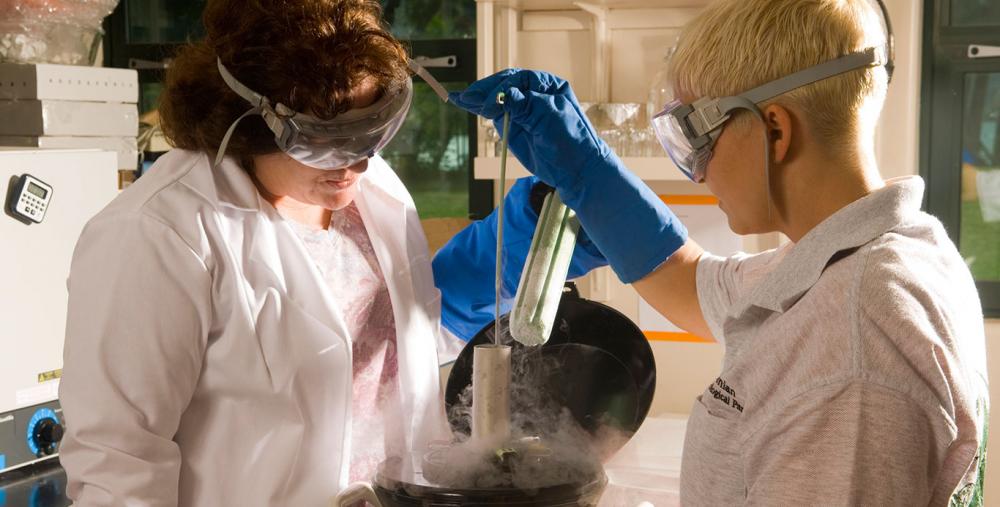 While there is still relatively broad genetic diversity in our oceans, we have a small window of years to achieve the proposed conservation impacts. Even though our oceans are at a critical juncture, experiencing substantial stressors and rapid loss of biodiversity, the potential for recovery is strong, but would require proper conservation efforts, such as the work being done by Dr. Hagedorn and her team. Having an established coral bank gives our oceans a fighting chance.

To date, the Smithsonian-led team have banked the sperm from 12 species of corals worldwide and created new coral from this frozen material. This means that these 12 species could be used for conservation strategies in our oceans today, and will remain safe from the threats of extinction in the future. Additionally, Dr. Hagedorn’s team is pushing technological boundaries to develop diverse technologies to preserve coral eggs and embryos, reef fish, sea urchins, and the algae that live inside the coral, expanding their efforts beyond just coral towards the whole reef ecosystem. These frozen resources can strengthen small populations by adding genetic diversity, provide rich research opportunities and potentially help reseed the oceans (once they return to more normal conditions). 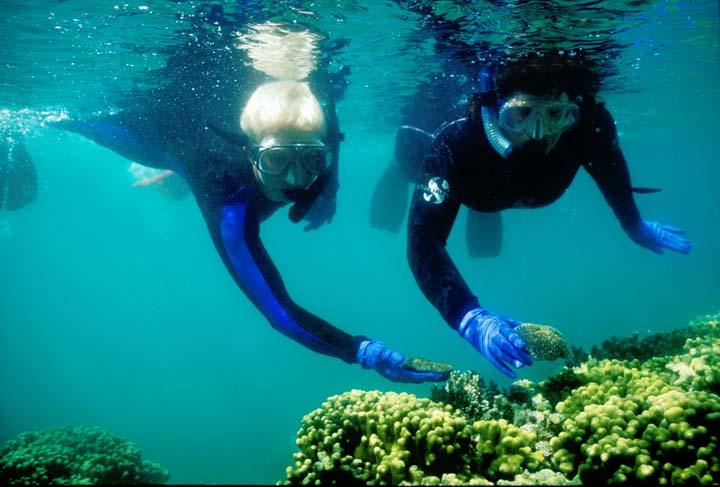 We remain hopeful, as long as key, new efforts are catalyzed and sustained in the coming months and years through training and education. We hope to produce coral preservation leaders focused on the reefs in each ocean expanding our global network of conservation scientists. This global network will augment what has already been achieved by a small group of scientists, who focus on these technologies. We know this is an amazing opportunity for ambitious young scientists who truly want to make a difference, We believe that this can have an unfathomable impact in a short period of time. We hope this challenge will appeal to supporters who love and recognize the value of our world’s coral reefs and want to see them survive. We as a global community have a chance to preserve what is left and reverse the damage that has been done to our oceans. 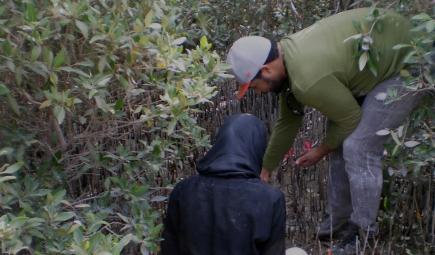