On January 12, 2010, a devastating 7.0 magnitude earthquake struck the island nation of Haiti, leaving more than 230,000 dead, destroying much of the nation’s infrastructure in its capital region of Port-au-Prince, and seriously damaging Haiti's rich cultural heritage. In the face of this tragedy, Smithsonian brought together international partner organizations, governments, and local communities in a global effort to recover, safeguard, and help restore Haitian cultural heritage damaged and endangered by the earthquake and its aftermath.

Less than a decade before the earthquake, Smithsonian staff had worked closely with Haitian cultural workers and leadership to celebrate the rich cultural diversity of Haiti at the 2004 Smithsonian Folklife Festival, Haiti: Freedom and Creativity from the Mountains to the Sea.  Commemorating the 200th anniversary of Haitian independence from France and the abolition of slavery, the festival brought more than 100 Haitian artists to the National Mall in Washington, DC.  Following the 2010 earthquake, Smithsonian built on these close relationships with Haitian government officials, cultural professionals, artists, and conservators to support the recovery of cultural heritage damaged by the earthquake. 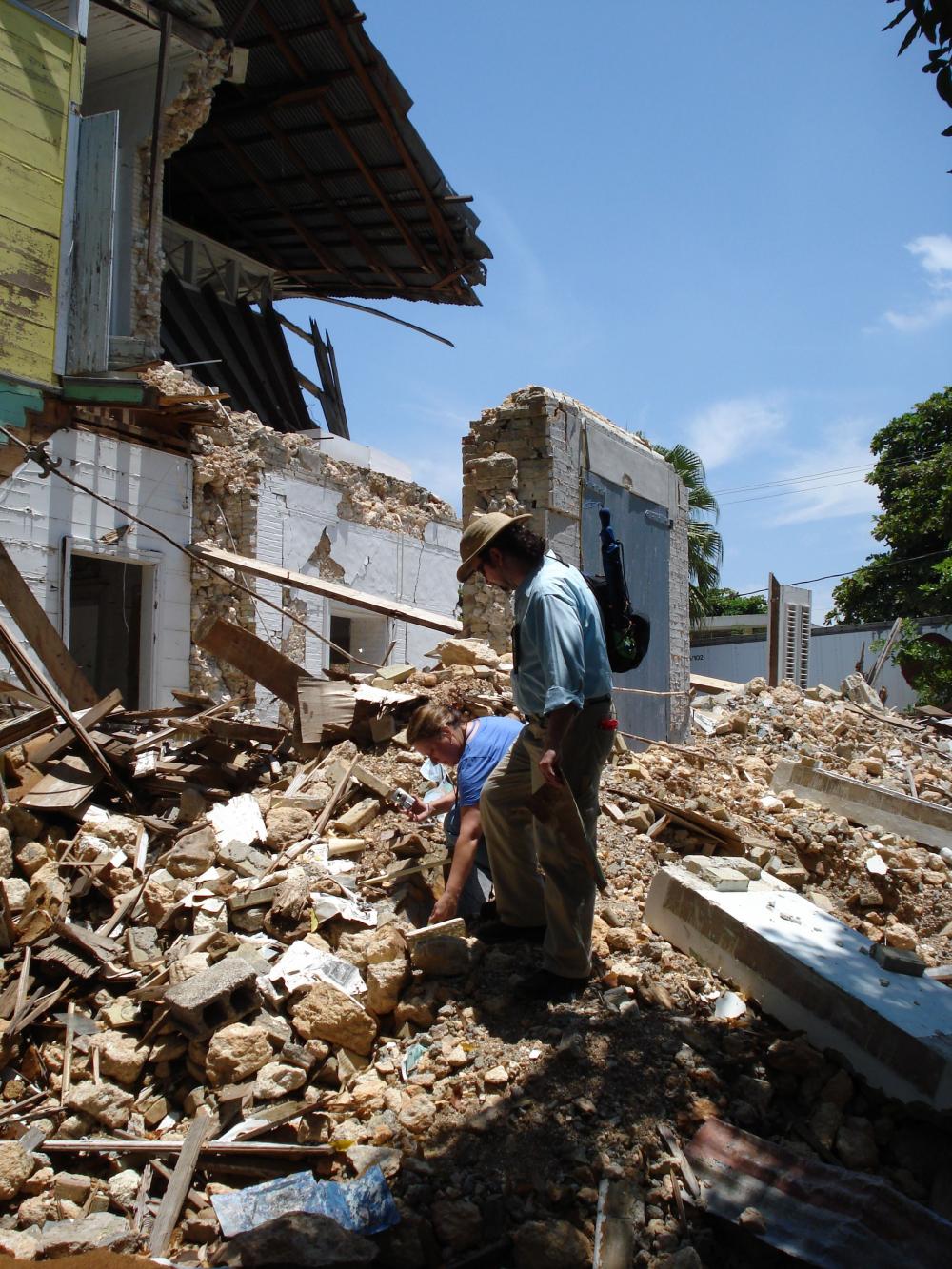 Preserving threatened cultural heritage—world heritage—was critical to the recovery from the earthquake. As Haitian sculptor Patrick Vilaire told the New York Times, “The dead are dead, we know that. But if you don’t have the memory of the past, the rest of us can’t continue living.” 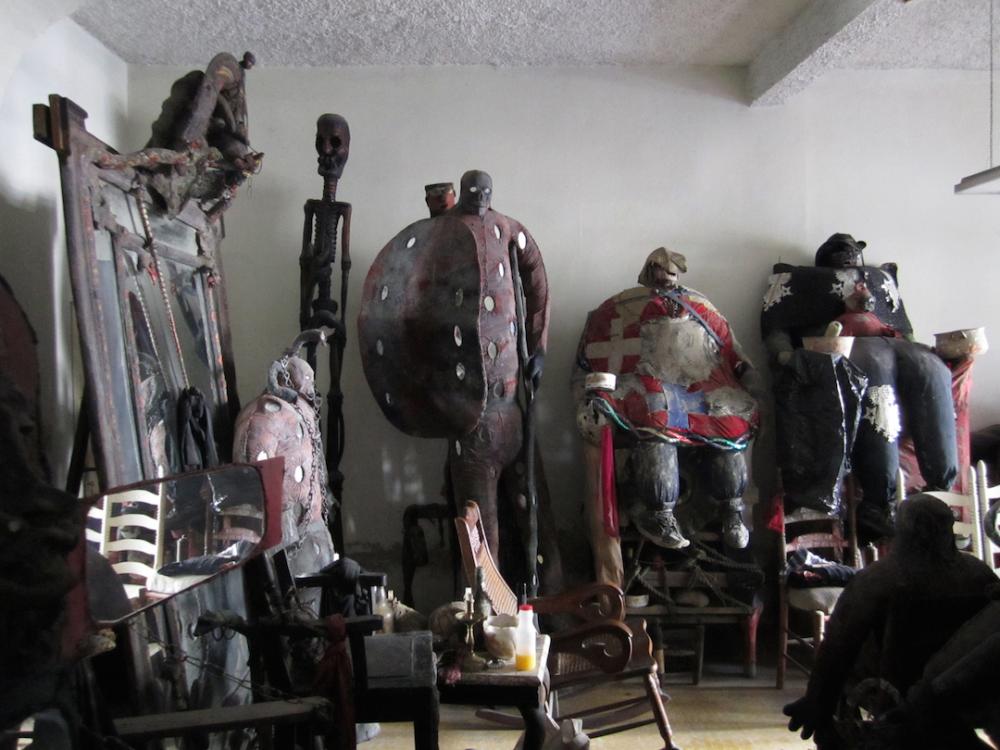 View of some of the bizhango figures in the Marianne Lehmann Vodou collection. Photo credit Stephanie Hornbeck.

Smithsonian established the Haiti Cultural Recovery Project in 2010 with the Haitian government’s Presidential Commission for National Reconstruction and the Haitian Ministry of Culture and Communication. Olsen Jean Julien, former Haitian Minister of Culture and Communication, oversaw these efforts as Manager of the Haiti Cultural Recovery Project.

Working with the support of the U.S. President’s Committee for the Arts and the Humanities, Smithsonian mobilized U.S. federal agencies to support qualified volunteer conservators to work in Haiti. Smithsonian also organized funding and support from non-profit groups including the Broadway League. Agreements with UNESCO, the American Institute for Conservation, the International Committee for the Blue Shield and consultation with the U.S. State Department assured close cooperation with other international efforts in Haiti. 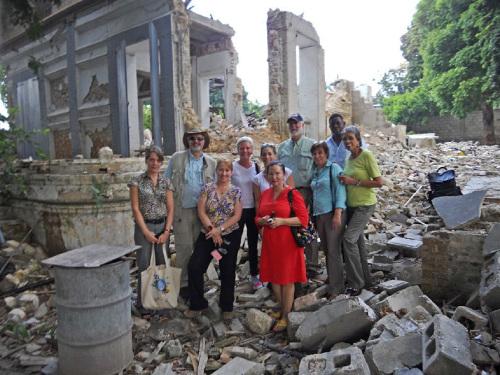 Members of the Smithsonian team and the President's Committee for the Arts and the Humanities at the Centre d'Art, 2010. Photo credit Corine Wegener.

Richard Kurin, Smithsonian’s Under Secretary for History, Art and Culture, led the initial efforts to reach out to Haitian and international government agencies, cultural organizations, and conservation professionals. He was inspired by Corine Wegener and enlisted her help. Wegener had served in the U.S. Army in Baghdad, helped local colleagues save collections of the Iraqi National Museum, and had founded the American Committee of the Blue Shield—an organization committed to protecting cultural heritage. Staff from across the Smithsonian with expertise in conservation determined how to focus recovery efforts with their Haitian counterparts and, together, created a plan to work with Haitian and international agencies in recovery efforts.

Smithsonian established the Haiti Cultural Recovery Center by leasing a former U.N. building in Port-au-Prince and equipping it with studios and air-conditioned storage space. Over an intensive 20-month period, the HCRC was staffed with 20 Haitian professionals and scores of visiting international experts to help stabilize and restore art, objects, paper and other media.

Chief Conservator Stephanie Hornbeck—recently departed from the Smithsonian’s National Museum of African Art—was enlisted to direct recovery and conservation efforts. These included development of protocols and procedures for the registration, storage and conservation of each and every object, the supervision of visiting contract and volunteer conservators and Haitian conservation assistants, and coordination of training programs in conservation for scores of Haitians from several dozen cultural organizations. These programs equipped a new generation of Haitians with vital skills to recover, preserve, and protect their cultural heritage. 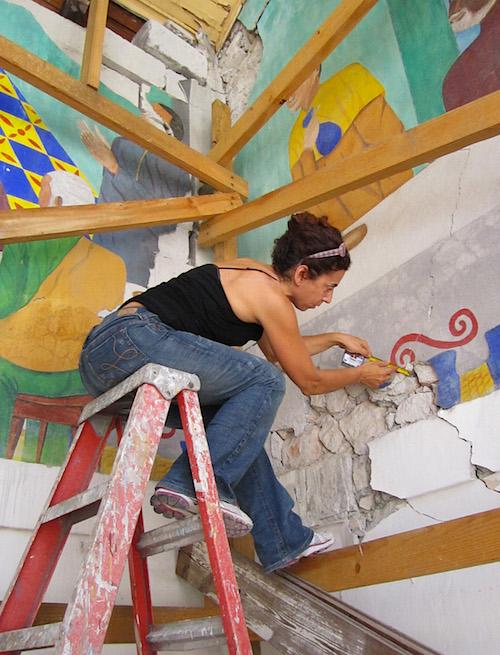 Haitian and international conservators worked together to rescue the surviving larger than life-sized murals of the Holy Trinity Episcopal Cathedral. Painted by Haitian master artists in the late 1940s and early 1950s, these murals hold deep spiritual meaning for many Haitians and are regarded as a national treasure. The murals—painted in egg tempera on a very thin lime mortar layer—depict New Testament scenes innovatively reimagined with Haitian figures. The earthquake collapsed the roof of the church, destroying most of the walls and eleven of the fourteen murals that had decorated the Cathedral.

To conserve the three remaining Holy Trinity murals, conservators took one year to plan and execute the project. The murals were lifted in 142 very fragile sections from three-story high walls, shored up with scaffolding lest they collapse. A mural painting conservator led the project, aided by an architectural conservator and four Haitians trainees, to delicately remove the murals in sections. The lifted and stabilized fragments are now stored in a new depot on the Cathedral’s grounds. When the sanctuary is rebuilt, the murals will be incorporated into a new structure.

Other major projects included the cleaning and stabilization of more than 5,000 paintings, works on paper, and sculptures from Haiti’s famed Centre d’Art, restoration work on masterpieces from the National Palace, the cleaning and storage upgrade of over 3,000 artifacts of the important Marianne Lehman vodou collection, and facilities improvements at the National Archives and the National Museum. 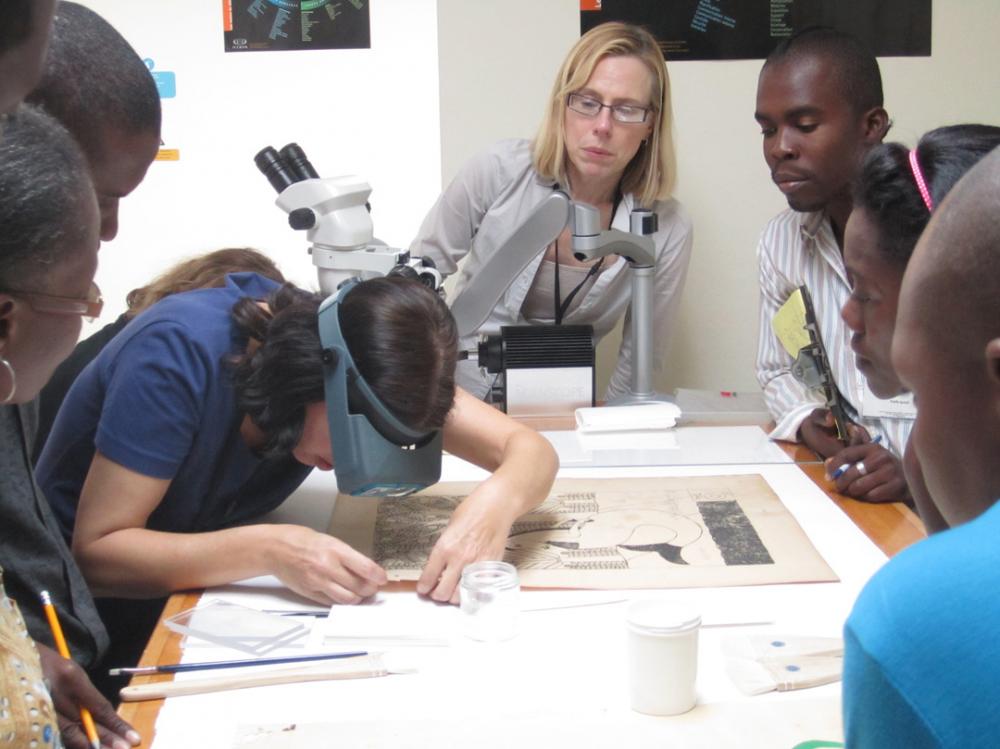 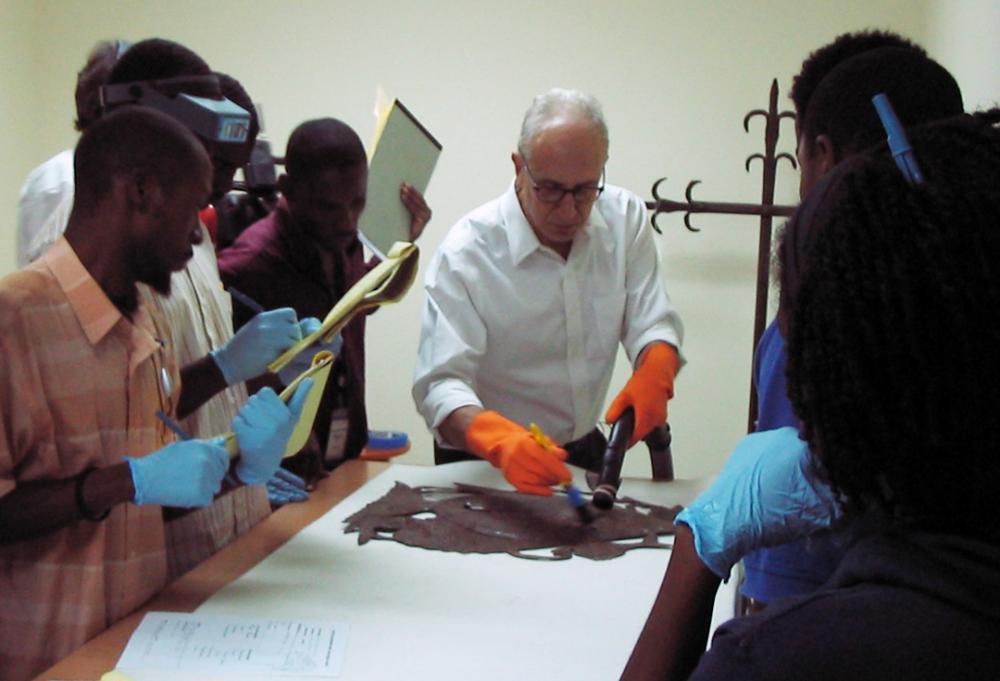 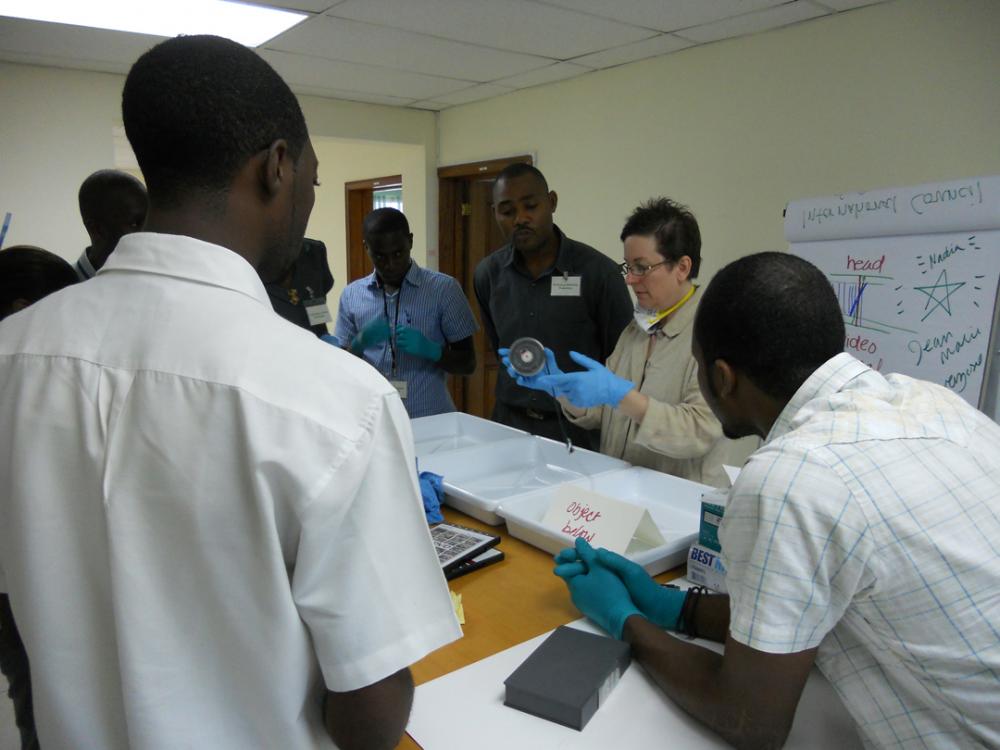 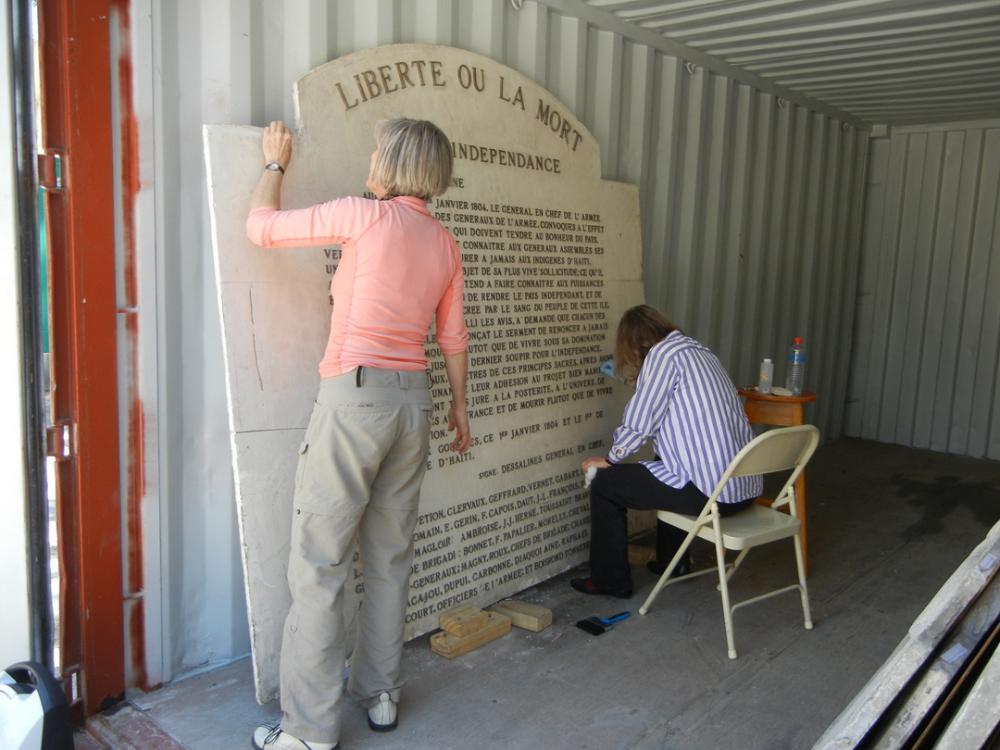 Over the course of the project, more than one hundred local participants representing more than two dozen cultural organizations attended one or more of the nine training sessions organized by the Smithsonian and the Haiti Cultural Recovery Project. These training programs equipped a new generation of Haitians with vital skills to recover, preserve, and protect their cultural heritage. 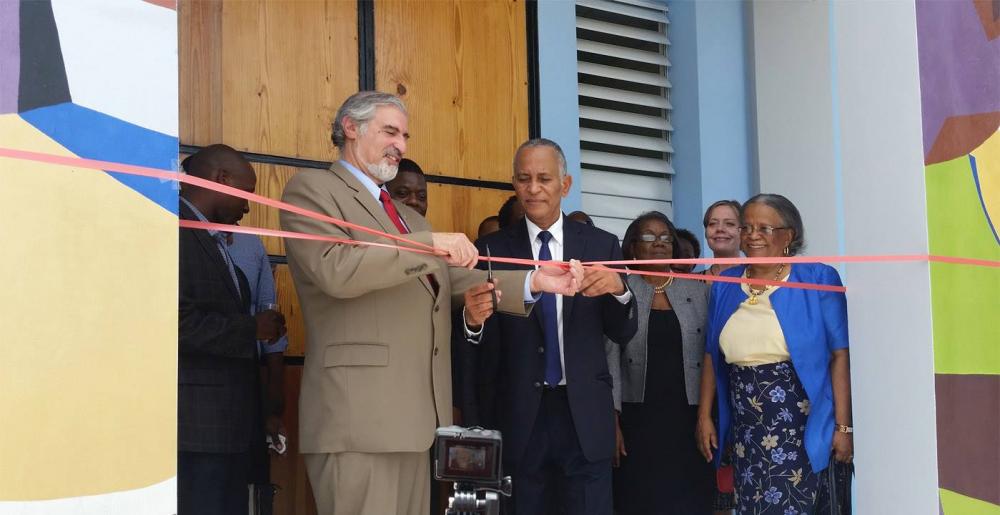 To date, the Project has restored more than 30,000 items, including artifacts, paintings, sculptures, monuments and historical documents, and trained more than 100 Haitian culture professionals. It also inspired a book, Saving Haiti’s Heritage, a documentary film, Haiti’s Treasures: Out of the Rubble for the Smithsonian Channel, an exhibition at the Smithsonian’s National Museum of African Art and others at the Clinton Presidential Library and a New York art gallery, and a special program at the Smithsonian Folklife Festival. 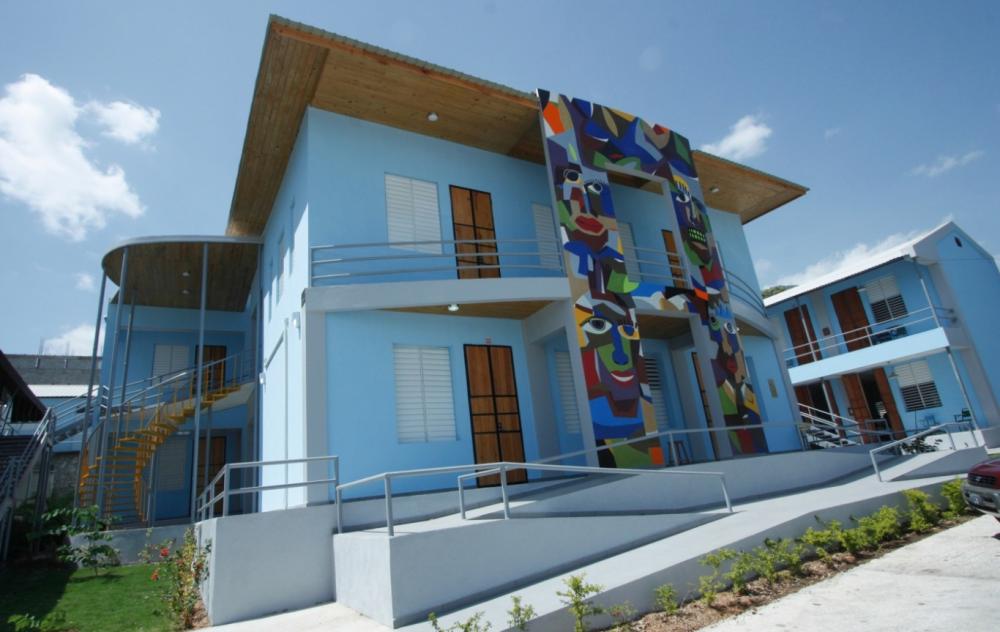 On June 29, 2015, Smithsonian Under Secretary Richard Kurin, Corine Wegener, Stephanie Hornbeck, and Olsen Jean Julien joined the Haitian Minister of Culture and the U.S. Ambassador to celebrate the opening of a permanent Conservation Center at Quisqueya University in Port-au-Prince. Demonstrating the collaborative spirit and ongoing commitment of its founders to this important work, the Quisqueya Cultural Conservation Center (Centre de conservation de biens culturels) will serve as a professional center for the continued documentation, preservation, and restoration of Haiti’s cultural heritage. Funds from Quisqueya, the Smithsonian, USAID, and the Stiller Foundation supported its construction.